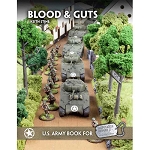 Disposable Heroes & Coffin for Seven Brothers was released close to 14 years ago by Iron Ivan Games. In that time, they had released over a dozen titles covering a variety of wargaming periods and genres. While by no means the most popular WWII system, Disposable Heroes & Coffin for Seven Brothers achieved a good reception in the WWII rules market and was commonly referenced and suggested in many online rules queries. With a solid system for WWII combat and fully supported by the nearly complete selection of supporting army books,

So Why an Update?

Brigade Games and Rattrap Productions acquired the entire Iron Ivan Games catalog in 2015. After the transfer of ownership, we asked one of the original authors, Keith Stine, to write and develop a complete revision of the original rules. This system is called Disposable Heroes II. It was always the intention to streamline, improve, and update the system, yet keep the elements that made the original rules popular and fun.

Disposable Heroes 2 was successfully funded with a Kickstarter in December 2016. We shipped the books, tokens and PDFs to backers in March 2017.

Disposable Heroes 2 WW2 Small Unit Wargaming Rules are now available on general release. We do have a limited run of hard cover books in addition to the soft cover books. Additionally, we have token sets that can be used in the game should you desire.

If you are looking for a PDF of DH2, please visit our download section:

We have a separate web cart system for PDF downloads.

You can access it by going to the PDF Store link below, or in the category tree at the left.
When adding PDFs to the cart, this will open a separate cart just for your PDF order, and is separate from this main webstore. It will work as a popup cart as you add items and eventually check out. The emails will be from brigade games via SendOwl.